If you run into ACA member Sherri LaShomb, DC, of Lewiston, N.Y. these days, you might want to greet her with kon’nichiwa – Japanese for hello. LaShomb has been brushing up on her Japanese ever since learning that she was chosen to be one of a select group of healthcare volunteers who will support athletes competing at the 2020 Olympic Summer Games in Tokyo, Japan. 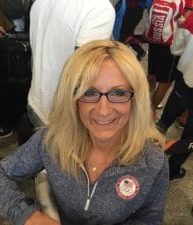 “It’s my way of giving back to my sport as well as my country,” she says.

The Games in Tokyo, which take place July 24-Aug. 8, are far from Dr. LaShomb’s first. She has served at the Olympics four times previously: Atlanta (1996), Salt Lake City (2002), Athens (2004), and Rio (2016). In Rio, she participated as an official member of the USA Taekwondo medical team, which came with some special perks such as the opportunity to stay in the Olympic Village where athletes live during the Games.

For the 2020 Games, Dr. LaShomb competed with 200,000 other providers for the privilege of volunteering in Tokyo. She described the application process as “tedious” – an online application, then follow-up questions, an in-person interview and finally instructions to listen to a series of informative podcasts. But getting the chance to go was worth it. “The Olympics are the quintessential sporting event,” she says.

Having credentials as both a chiropractor and an athletic trainer may have given Dr. LaShomb an edge. The combination has been advantageous in her career-long pursuit to treat athletes at various high-level sports competitions. Not only does she bring two sets of specialized skills and techniques to the table, “it’s a cost-savings for organizations to be both as well,” she explains. Among her long list of achievements, she has worked as the head athletic trainer/team chiropractor for the Buffalo Gladiators semi-professional football team and the head athletic trainer for the Buffalo Bandits professional men’s lacrosse team. She has also represented the USA at numerous international Taekwondo competitions, such as the Pan American Olympic Qualifier (2016), the Pan American Games (2011 and 2015) and the World Taekwondo Championships (2015), as well as at the U.S. Track and Field Finals (2006, 2007, 2009, 2010 and 2011) and the U.S. National Figure Skating Championships (2005).

In Japan, LaShomb has been assigned to a town called Chiba, about an hour outside of Tokyo, where the Taekwondo competitions will take place. She has been active in the Taekwondo community for many years and is currently medical director for the National Collegiate Taekwondo Association.

At the Games in Japan, she looks forward to working with Taekwondo athletes from many different countries. Her days will start around 7 a.m. and wrap up around 7 p.m. each night, when the competitions end. Afterward, there are often healthcare team meetings to attend. It’s a strenuous schedule, but it’s also rewarding to help athletes achieve their best and possibly attain their dream of earning an Olympic medal. It may surprise some to learn that many of the athletes who travel to the Olympics are self-funded and have nothing near the resources of the those with big endorsement contracts. “It’s important to be there for [these worthy athletes], to give back,” she says. 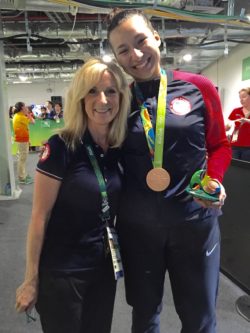 As a healthcare professional, Dr. LaShomb also gets something valuable in return: the opportunity to work with “super high caliber” sports healthcare providers and trainers. She especially appreciates the camaraderie among the healthcare teams at the Olympics, who work together collaboratively for the benefit of the athletes. Many are willing to share what they know and are also eager to listen and learn. “I learn something at every event,” she says. “And I’m able to teach someone something that I know.”

“Sports really can bring people together,” she adds. (LaShomb is pictured at left with USA Taekwondo team member Jackie Galloway, who took home a bronze medal in the 2016 Rio Games.)

LaShomb’s love of sports began early in her childhood. She recalls her father taking her to football and hockey games and she always knew she wanted to work in sports one day. After she earned her Doctor of Chiropractic Degree from Palmer College of Chiropractic in Iowa, she pursued several other certifications to enhance her ability to meet the needs of athletes. Today, she has credentials as a certified personal fitness trainer, a Certified Chiropractic Sports Practitioner (CCSP), an Athletic Trainer (ATC), and an International Certified Chiropractic Sports Practitioner (ICCSP).

As a leader in sports chiropractic who has served previously as president of ACA’s Sports Council (2012-2014) and is currently medical director of the National Collegiate Taekwondo Association, Dr. LaShomb encourages chiropractors who are just getting started in sports to get involved by working events and learning firsthand what it takes to help athletes deliver their best performance possible. In this way, she herself can help prepare and pass the torch to a new generation of sports chiropractors.

If you or someone you know is an ACA member who will be traveling to Tokyo this summer to support Olympic athletes, contact [email protected].