Home » Newsroom » Blog » Trending in the Media and at Home: Musculoskeletal Pain

In April, about a month after COVID-19 stay-at-home guidance went into effect in many places across the United States, the American Chiropractic Association (ACA) worked with the Wall Street Journal on an article about musculoskeletal (MSK) injuries. At the time, millions of adults had been sent home to work remotely with little or no preparation. Those without home offices set up makeshift workspaces on kitchen tables, couches or other available spaces. ACA worked with the WSJ to determine whether doctors of chiropractic had noticed an increase in cases involving pain from working at home and, if so, to collaborate in bringing this information to the attention of the public. The association developed a poll, posted on Facebook, to gauge whether chiropractors were in fact seeing a trend. As it turns out, they were.

ACA’s poll results were published on April 21: A majority (92 percent) of the respondents confirmed that they were seeing an increase in MSK conditions such as back pain and neck pain or knew of people who were having these issues as a result of working from home. The results were shared not only in the Wall Street Journal article, but also in a later New York Times article, and many subsequent articles and broadcasts generated after that. It has been a trending topic in the media for months.

More on the Trend

In preparation for this year’s National Chiropractic Health Month (NCHM) “Active and Adaptive” campaign, which was aimed at encouraging people to move more and adapt to the new normal in other healthy ways, ACA decided to dig a little deeper. In polls posted in the MyACA community in August, we asked members additional questions to determine what was contributing most to the work-from-home injuries they were seeing. More than half of respondents (57%) said that lack of movement was the main reason MSK issues were on the rise during the pandemic, followed by psychological stress (20%) and poor posture (12%). 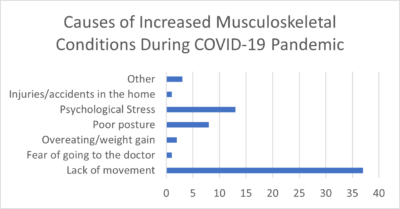 Doctors were also asked to identify what musculoskeletal issue in particular they were seeing more of during the pandemic. “All of the Above” received the most votes (37%), followed by cervical pain (24%), lumbosacral pain (20%) and cervicogenic headaches (12%). 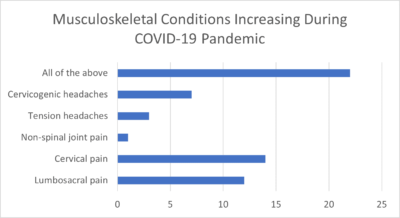 The MyACA polls provide further evidence that pandemic-related lifestyle changes have taken a toll on musculoskeletal health, creating a painful hurdle for many people struggling to find their bearings and stay positive. While NCHM may end with October, encouraging communities to remain “Active and Adaptive” is a message that can continue to resonate through the duration of the pandemic.

Annette Bernat is ACA vice president of branding and communications.